For women in sports, you need to see yourself to believe in yourself

For women in sports, you need to see yourself to believe in yourself

Recently, I had to honour to sit on a panel following Sarah DeLappe’s Pulitzer Prize-nominated play, The Wolves. Making its Toronto debut with The Howland Company and Crow’s Theatre and directed by Courtney Ch’Ng Lancaster, it stars nine fierce actors who portray the high-school age soccer team by the same name.

The actors’ focus, the drills, the dialogue and the gentle – and not-so-gentle – jabs at each other got me nostalgic for a similar time in my life. A time that shaped who I am today.

Soccer was my true love for almost two decades. From under-10 through my impressionable teenage years, to Saint Mary’s University in Halifax and beyond.

Like the members of The Wolves, my teammates and I grew up together. ‘The Beautiful Game’ taught us about life and the value of teamwork. It built confidence and leadership skills. It taught us how to win and how to lose. It was a safe space. And a space that helped shape our identities.

While The Wolves also touches on larger themes in the world, at its base is the theme of sport. And in particular how vital it can be for young women.

That’s where our panel came in.

Moderated by TSN SportsCentre anchor Kayla Gray, it included Olympic bronze medallist Deidra Dionne; Allison Sandmeyer-Graves, CEO of the Canadian Association for the Advancement of Women and Sport (CAAWS); Deirdre Norman, Founder of The Women of Winter, a grassroots organization that promotes female participation in hockey; and my CBC Sports colleague Liana Bristol, who manages our Olympic business relationships and chairs our women in sports initiative. 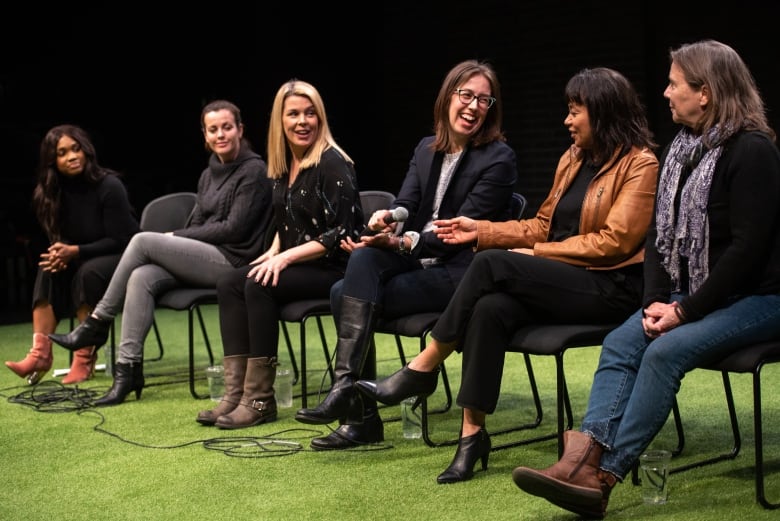 The panel’s goal was to have a conversation beyond the theatre about empowering women through sport – as athletes, coaches, parents, members of the media, executives, and fans.

I’ll put forward a question Kayla Gray asked so eloquently: “How can we move beyond conversation and put the pursuit of gender equity into action?”

Yup, we dove right in.

We’re getting there. That was my response and I think we all agreed to a certain point. But there is work to be done.

To start, don’t ignore the stats. Be alarmed by them.

According to CAAWS, girls’ participation in sport drops by 22 per cent when they hit teenage years.

That’s heartbreaking. I don’t know who I would be without sport. I believe it’s an age when we, as young women, need it the most. As Dionne said, if one sport or activity doesn’t click, move on to something else. She tried at least a dozen sports before landing in aerials. There are endless activities that promote healthy lifestyle.

Another stat. An analysis of Canada’s primary national sport networks in 2014, in both French and English, showed that men’s sport coverage significantly outweighed that of women’s coverage.

And that was an Olympic year. 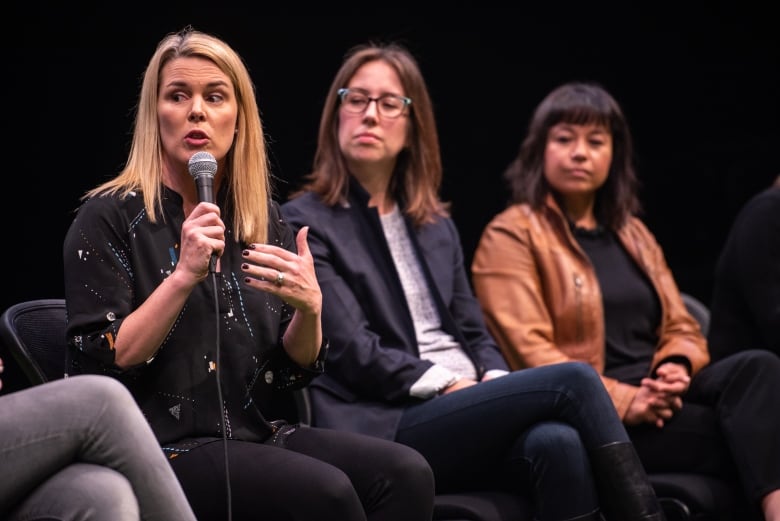 All of us need to step up and fight for those stories to get airtime. Lobby to get those games on TV or online. Not just those of us in the sports media business: it’s the viewers, the sponsors, the sport governing bodies. Champion all of your athletes and teams.

The final topic we talked about was role models. There is so much power in role models, but first, you have to be able to actually see them. Whether it’s on the field, ice, or court, or in boardrooms and courtrooms, you can’t aspire to be someone you can’t see.

Thanks to organizations like CAAWS, Fast & Female, Shes4Sport and others, young women have a chance to see people in positions of strength and power who look just like them.

When I was aspiring to work in sports media, there were a handful of women I looked to as role models. Teresa (Hergert) Kruze and Lisa Bowes at TSN, Terry Leibel at CBC, and my now-colleague, the she-can-do-anything Brenda Irving. I can assure you there are many creative, smart women behind the scenes, too. I became what I could see with a tonne of hard work and people championing me along the way.

I am who I am today because of sport. And I want every woman out there to have that same gift.

The Wolves concludes its run Oct. 28 at Crow’s Theatre in Toronto.