When Will Youth Sports Actually Serve the Needs of Youth?

When Will Youth Sports Actually Serve the Needs of Youth?

In late February I was traveling and speaking in Sydney and Perth, Australia, working for a variety of sports organizations including the Football (Soccer) Federation of Australia, Football New South Wales, the Western Australia Department of Sports and Recreation, and the WA Aussie Rules Football Committee. While on site, I got to visit the brand new $1.5 billion Optus Stadium in Perth. As I toured the stadium with Project Manager Ronnie Hurst, he kept speaking about the guiding principle they used to build this incredible venue. From the placement of every seat and cup holder to how much leg room it had, from the location of every food stand to access for people with disabilities, every single aspect of the four-year project had to check a single box: 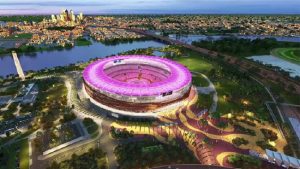 Everything they built or designed had to put the comfort and viewing experience of the fans above all else. After all, wasn’t it about them? Wasn’t it their money and willingness to spend it that paid the bills and allowed the stadium to exist in the first place? As a result, anything that did not benefit the fans did not become part of the project. This simple guiding principle of “Fans First” was essential to building an incredible fan experience in the stadium.

It got me thinking about youth sports all over the world, from grassroots clubs to schools to professional team academies across every sport. Shouldn’t they have a guiding principle as well? If our goal is to build an incredible child experience in sports, shouldn’t everyone ask themselves, whenever they make a decision:

“DOES THIS SERVE THE NEEDS OF THE CHILDREN FIRST?”

The simple question should be asked by everyone in sports, over and over. It is the box that should be ticked whenever a decision is made, or a program is implemented. It is the question that should be asked by every coach as he or she designs a practice, or signs up for competition. Much like Optus Stadium asked “Does this benefit the fans?” and Google always ticks the box “Don’t be evil”, every youth sports decision should adhere to “This serves the needs of the children.”

Yet so often that does not happen. If we want children to keep coming back to sports it better fulfill their wants and needs. Yet over and over, decisions are made, programs are implemented, teams are formed, and competitions are structured to serve the needs of adult administrators, coaches and parents, but not the kids. Organizations rarely ask “Is this what best serves the kids?” This is maddening. This is destructive. This is why kids quit to the tune of 70% dropout before middle school.

My friend Dr. Richard Bailey, head of research at the International Council of Sport Science and Physical Education says it best: “Let’s be honest, most elite sports programmes are not designed to meet children’s needs; they are designed entirely for adult ambitions.”

Here are 6 examples of common situations that do not serve the children playing sports, and potential solutions:

This topic is more a book than a blog so I will stop my rant here. But I will leave you with this.

If you are a coach or sports administrator, please stop making decisions without asking “Does this serve the needs of the children playing?”

If you are a parent signing your child up for an activity, ask the organization “How does competition format serve the needs of the child?”

If you are a member of an organization, when you go to the AGM and they tell you how money is being budgeted, or which coaches are assigned where, or what funds are being used for, ask “How does this serve the needs of the children playing?”

Youth sports must start putting its kids first to build an incredible experience.